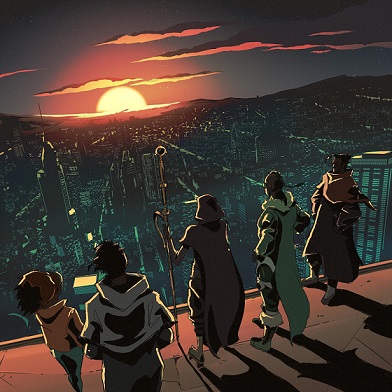 Production Duo Christian Rich is formed of twins Kehinde Hassan and Taiwo Hassan. They’ve been nominated for Grammys, and they’ve probably worked on some of your favourite songs. To list a few names: Childish Gambino, Earl Sweatshirt, Vince Staples, Drake – Christian Rich have been behind the production for some of these acts most forward-thinking tracks.  If you really want the history, they’ve been making records since 2001, back when they were students and had moved back across to Chicago from Nigeria, where they’d spent a few years as kids. They sold beats at school, for as little as $25. Later, as part of a production company, they placed songs with the likes of Lil Kim, Foxy Brown and The Clipse. But after a short while they decided to set out on their own, launching with solo self-produced single “Famous Girl” in 2009.

This track caught the attention of Shay Hayley of N.E.R.D, who initially managed the duo. And as a result, their music found its way to Pharrell Williams too. He liked their stuff, and immediately brought them in to work on a record with Diddy – “he called Puffy right away, telling him ‘I’ve got the guys that’ll help you finish your album!” says Taiwo. From there, they’ve built up their discography of features and moved between Atlanta, Los Angeles and now to their current residence, in Berlin.

After dropping debut album ‘FW14’ in 2015, with features from GoldLink, Vince Staples and Jay Sean, the duo are returning with new track “Shibuya (Ghost II)”. Featuring Jaden Smith, Belly and Vic Mensa, the track is a continuation of Christian Rich’s keen ear for collaboration, as well as sharpening their knack for eerie yet warm club-ready rap.

On the genesis of the tracks, the guys explain: "We created this track while on a recording trip in LA.  When we got back to Berlin, we sent the track to Jaden, Vic Mensa, and later Belly.  Jaden finished his verses within a day or so.  We were looking for just one verse from each artist but Jaden did 3 verses and liked the song so much that they asked if they could release a version of song as well as, which we thought was dope and agreed to it.”

That ended up becoming "Ghost", which racked up over 80 million streams. Fast forward to now,  "Shibuya (Ghost II) " is the next chapter and Christian Rich’s take on the "Super Team" concept, similar to the NBA.

“Delivering songs with superstars all on one song, we see them like combining the Avengers.  Visually we created a short film concept to bring a new look to contemporary music but with nostalgic elements that connect the viewer to forgotten childhood adventures". Accordingly, the music video is an anime-inspired journey through the Shibuya district in Tokyo: “We wanted to touch on the cartoons we watched as kids in Nigeria – G-Force, He-Man, stuff that’s nostalgic.”