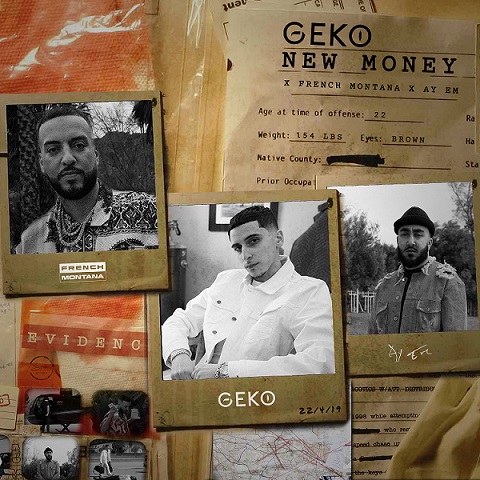 Arabic-swing, Manchester-based artist Geko releases a fresh new single “New Money” in collaboration with French Montana and Ay Em. It was produced by Jay Weathers who has produced for the likes of Wiley and Yungen. This new single is just one segment of the exciting new project led by Geko, “22”.

“New Money” offers a combination of Geko’s classic blend of afro-wave and UK rap, with vocals from featured artists French Montana and Ay Em. Both possessing Moroccan influences, Geko believes they each share a unique way of listening and interpreting music, which will influence the worldwide appeal of the record.

The track features a fusion of classic hip-hop beats while the distinct afro-wave melodies layer up the record. French Montana provides the hip-hop influences whilst Ay Em’s hazy, trap-style vocal style shines through.

After the success of previous single “6:30” - which reached an incredible 36 million streams worldwide without mainstream backing - it is clear that “New Money” has potential to mirror this recognition. The track showcases just a snippet of what to expect from upcoming project “22”, and what is to follow from his upcoming UK tour. “New Money” is set for release on the 11th of April.

For more information on Geko, visit: