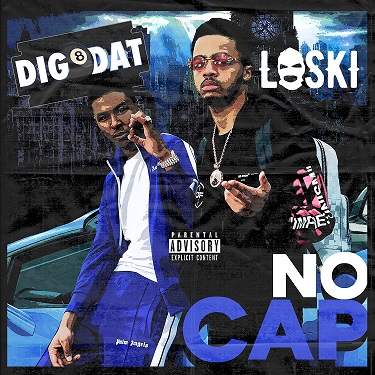 Today, rising stars DigDat and Loski have teamed up to provide fans with their highly anticipated track ‘No Cap’. After an incredible 2018 for both rappers, the two have come together to gift fans with one of the hottest collaborations of the year. The track out now via GRM Daily comes as a follow up to DigDat’ssmash-hit ‘Airforce’ and Loski’s most recent single ‘Boasy’.

The visual, which was directed by Kaylum Dennis captures the two in their element, flexing and vibing together – going back to back, complimenting each with their unique individual rap styles.

2018 was a breakout year for both rappers – a year in which Loski released several smash records including hit tracks ‘Forrest Gump’ and ‘Cool Kid’ as well as his most recent single ‘Boasy’ taken from his highly anticipated forthcoming mixtape ‘Mad Move’. In the same year, DigDat burst on to the scene in epic fashion, earning himself an amazing top 20 spot on the UK Top 100 Official Chart with the remix of his track ‘Airforce’, one of the biggest tracks of last year, featuring Krept & Konan and K-Trap. With so much more to come from both rappers, this track is a firm nod to their outstanding talents as they look to solidify themselves as two of the UK’s brightest artists.

It says a lot about you when you’re a feature on someone else’s song and yet your verse is what everyone is talking about—and that’s exactly what happened when DigDat featured on “Back 2 Back” from Headie One’s The One Two, arguably the biggest drill project to come out this year. Add to that the remix of his song “Air Force”, featuring UK rap heavyweights Krept & Konan and K Trap, reaching the Top 20 in the Official Singles Chart (the highest position ever for UK drill) and you have a formidable artist on your hands.

Complete with tales from the jailhouse and the roads, immersive imagery and witty wordplay, DigDat reeks of authenticity and is unafraid to speak his mind on a verse. Take his Mad About Bars freestyle with Kenny Allstar, for example, where he spits “I can tell you about calls on the jail phone, bro don’t answer, you lose 10p” as casually as if he was telling you he went to the shops. It’s his nonchalant attitude that makes his obvious talent seem so effortless that it feels as if he hasn’t even got out of first gear yet—which is only that much more exciting for the future, considering what he’s already done for the genre of drill thus far.

DigDat’s penmanship is already so established that he’s been able to produce high-quality tracks (making drill history in the process), and still include lyricism that at times makes you double back and question what you heard due to the cleverness of the lyrics with double entendres and intricate wordplay. And in a time where remixes are often lazy affairs—with a feature usually the only addition to the track—DigDat added a whole new verse to the chart-bothering “Air Force”remix, holding his own with some of the biggest names in the scene. If you’re not already switched on to DigDat, then you definitely should be.