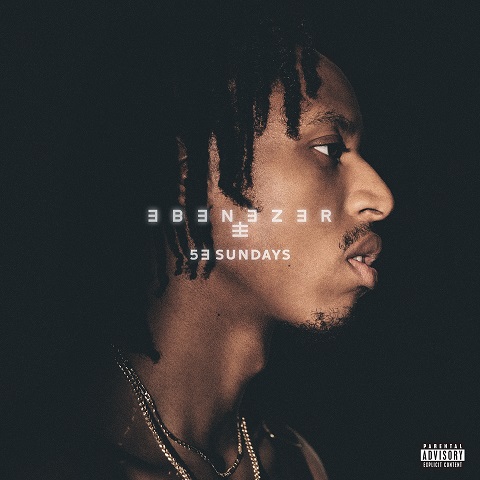 The 13-track project stands as a testimony to Ebenezer’s versatile and unique talent; touching on issues of religion, family and determination all of which were central to making Ebenezer the man he is today. Full track listing below. The project includes recent single ‘Glory’ as well as lead track '53 Sundays', which was accompanied by a cinematic visual shot in New Orleans and premiered via i-D.

“The overall concept of '53 Sundays' is false prophets & blind faith. Me losing faith in religion and turning to this ‘get it by any means’ hustler lifestyle, made me question everything I’ve ever believed in. I don’t look to leaders to lead me. I am the master of my own fate and destiny. Growing up we never had anything, barely enough to put milk in our cereal, so we made due with water. From cousins who were supposed to be family kicking us out on the streets, thinking we need salvation, we need a miracle. We make our own miracles! '53 Sundays' is my truth," speaks Ebenezer.

There are channels to life, specific lanes each of us can enter provided we have the correct mind set and ambition. Then, when we’re locked in, things start to slide into place. At least that’s what happened with twenty-five year old Ebenezer. “The energy you give out is what you get back,” he explains. “We have to train ourselves to think positive, be positive, then it’ll come back to us.”

Ebenezer’s newest release - the highly anticipated ’53 Sundays’, is a conceptual project inspired by his questioning of the importance of Church and God. Despite the emphasis that his environment has always been putting on religion and prayer, he felt that it’s his hard work, rather than divine providence, that helped him achieve all his success. The project is filled with much more than just religious themes however, touching on subjects from all realms of Ebenezer’s reality. The track “Christian Dior”, for instance, focuses on his desire for designer brands which, for the majority of his life, seemed to be an intangible dream whilst re-emphasising his clever word play.

In another strand of the project, he reveals his sentimental side - ‘Brother’s Keeper’ and ‘Blasphemy’ pay respect to his older brother and show appreciation to the loyalty of his ride-or-die friends. “I have the best people by my side, they’d blast for me, get it?” he laughs. Reflective track ‘What If’ perfectly rounds off the project, reminiscing on everything he’s been through that got him to the place he is in now. “There’s so many what if’s in my life, so many things that should’ve or could’ve happened but here I am.”

In a few short years he’s worked with the likes of Craig David, Jeremih, Ty Dolla $ign, Rejjie Snow, Stefflon Don and ADP. His previous releases, including ‘Cliche’ and ‘When I Call Em’, saw Ebenezer as he carved the unique path he’s set for himself - one of emotionally tinged R&B with hints of trap, completely void of the usual pretence that’s flooded the genre. In a way, it could be described as conscious turn-up music, but without a holier than thou message it’s simply real. Ebenezer is telling his stories to the world. And when you look at the rest of the British scene, he’s created his own sound.

His debut project ‘Bad Romantic’ truly showcased his signature UK rap aesthetic. An ode to real romance, the EP jumps  from  energetic  deeper  trap  sounds  on  tracks  like  ‘Till  I  Die’and  ‘Catch  Feelings’ and  transitions  to  slower  vibes  with  more  emotive  tracks  like  ‘South  of  France’ and  ‘Nostalgia’,  overall  rounding  this  project  off  as  a  stunning  first  release  from  Ebenezer.

Ebenezer is a special artist: one for whom making music transcends ego and is buried deeper in what it means to be alive. “I’m learning how to express more about the things I wouldn’t share with people, the only way I can share it is through music,” he says. “I talk about my family, the struggles of it all, four people sleeping in a double bed in a box room with no radiator, using our bodies for warmth.” At the end of the day, he’s on a mission, in his own lane. Where other British artists may be focusing on grime or rap he’s created something as honest but in one way or another, more exquisite, soulful and reflective.