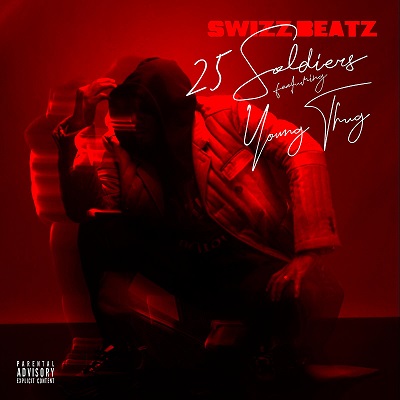 Following his recent return with ‘Pistol On My Side (P.O.M.S)’ ft. Lil Wayne, Swizz Beatz releases the visual for another fiery single - ’25 Soldiers’ ft. Young Thug premiered as Zane Lowe’s World Record on Beats 1 last night. Watch HERE. The dynamic video is a spectacle, giving an even further glimpse into Swizz’ artistic world. Once again, the megastar producer proves himself to be an absolutely unmatchable visionary, creating songs which are not only instant classics but also true musical experiences. Young Thug’s signature sound perfectly corresponds with the high energy of the track, undoubtedly making this release one to remember.

Swizz Beatz is a staple artist in Hip Hop. Early on in the game he helped Ruff Ryders become a formidable force with the likes of DMX, The Lox (Jadakiss, Styles P, Sheek Louch), Eve and others attached to the label. Swizz’ production discography is impressive. He has produced tracks like ‘Check On It’ & ‘Upgrade You’ by Beyonce, ‘Touch It’ by Busta Rhymes, ‘Ruff Ryders Anthems’ & ‘Party Up (Up In Here)’ by DMX, ‘Money, Cash, Hoes’ by Jay Z, ‘Hotel’ by Cassidy and many others. Aside from his production he also had a major impact in Hip Hop as an artist and has worked with everyone in the game including A$AP Rocky, Chris Brown, Nicki Minaj, Rick Ross, Alicia Keys etc. With over 580 songs in his catalogue, Swizz has contributed to the sale of more than 350 million records worldwide.

In the creative world of artists and executives, Swizz Beatz exists amongst the one percentile. Not solely based on his fortune––accrued over twenty years producing and curating for the finest artists - but more so for his contributions to culture. He’s a Kid Robot and Aston Martin designer, graduate of Harvard Business School, Hip-Hop’s reigning beat battle champion and catalyst for the resurgence of Reebok and the black art community. His No Commission platform fosters a new generation of visionaries while The Dean Collection 20 offers twenty artists around the world an opportunity to host their own show, retaining 100% of the profits.

Swizz has been locked in the studio for the past year and has posted numerous pictures of him at work with the likes of Giggs, J Cole, Lil Wayne, Young Thug Jim Jones, Travis Scott and others.

Something Dirty/Pic Got Us ft. Kendrick Lamar,