Its "Liquor & Whores from Marc Mysterio and the Trailer Park Boys' Bubbles ! 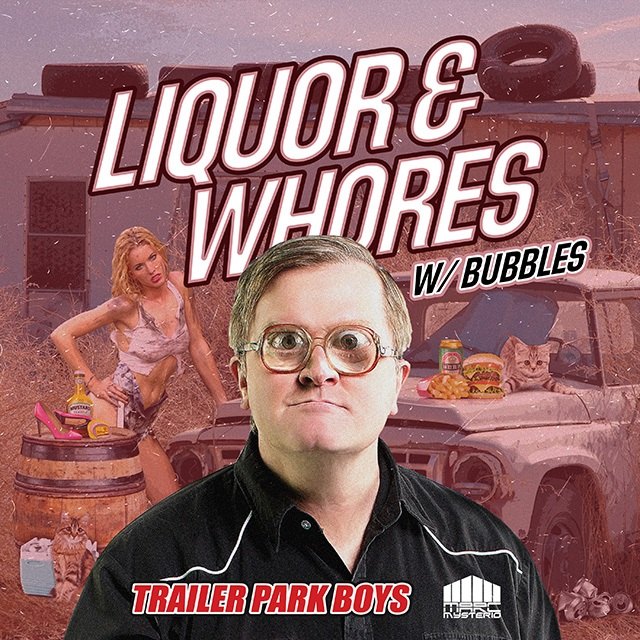 Canadian-Icon Bubbles, from the globally beloved Netflix Series 'Trailer Park Boys', is finally releasing his anthem, which he plays periodically in the series, for the first time ever - as an EDM track: 'Liquor & Whores'!

Liquor & Whores' has finally solidified itself as a cross-genre smash: Bubbles has sung and played 'Liquor & Whores’ on the Trailer Park Boys series and has  performed the song with Guns N' Roses at the invitation of Axl Rose at scores of concerts internationally.

'Liquor & Whores' is produced by fellow Canadian Multi-Platinum Producer Marc Mysterio (Flo Rida, Daft Punk, Crash Test Dummies, David Guetta) whom had one of this Summer's biggest EDM Hits in 'Be The Truth' scoring Top 10's in UK (Music Week Club Chart), USA (Top 10 US Billboard - Next Big Sound) whilst also being selected as a theme for ESPN First Take show for the entire month of December. It was supported by every major Dj globally - including Tiesto on his famed Club Life Radio Show!

The production for 'Liquor & Whores' came about in a rather organic and ironic fashion, according to Bubbles: "A few years ago Julian brought this big fancy DJ, Marc Mysterio, in to the Dirty Dancer to try and get more ladies in there, and we got on the liquor that night and really hit it off. Anyway, couple weeks ago he calls me up and says, “Hey we could make a lot of money if we recorded ‘Liquor and Whores’ as an EDM track!” I didn’t even know what an EDM track was but I said, “Go for it bud.”

"I'm grateful for Julian bringing me back to Sunnyvale that night a few years back. I was just traveling from Montréal to Newfoundland, and stopped to rest in Dartmouth for the night and was brought to the dirty dancer to meet Bubbles. He's an interesting cat" concludes Mysterio. 'Liquor & Whores' by Trailer Park Boys, Marc Mysterio w/ Bubbles is available on all platforms as of Friday The 13th!